Can you believe in evolution?  Evolutionists say no…Creationists say absolutely, yes.  Evolution seems to be the atheist’s linchpin.  Evolutionary discussion under the guise of anything other than fact, is a deal breaker.  So what happens when a believer offers such a claim? Well, episode 033 happens: the good, the bad, and the ugly.

We invited Young-Earth Creationist, Tim Chaffey from Answers in Genesis on the podcast to give us his perspective.  Tim is the content manager for the Attractions Division of Answers in Genesis. An apologist with a passion for training young people, he speaks regularly at the Creation Museum, camps, schools, and churches, and has authored numerous books.

Tim was interested in Miracles and Atheists because he liked the idea of having a good respectful dialogue on these issues.  So did he get it?

Representing the atheist position is Jason Williams.  About six months ago, Jason joined us in what most would consider to be a rather productive conversation about prayer, with Christian Robby Graham on episode 019.  The show was respectful, light-hearted and we all left our microphones with smiles on our faces.

Jason works as an English teacher out of Guatemala where he lives as an expat.  He says like America, where he grew up, Central America is plagued by religion.

We invited Jason back on the podcast to talk about evolution, because based on his comments from social media he has both a passion for and strong opinions about the subject, and he seemed knowledgeable. 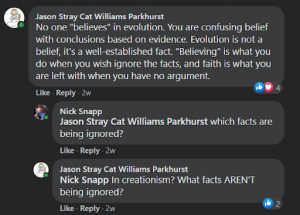 Stay tuned for the most colorful episode we’ve ever conducted on Miracles & Atheists.