From our many conversations with atheists, a pattern we’ve noticed is that one of the primary catalysts for a person accepting an atheistic world view is due to hypocrisy in the Church. Racism is a good example of this hypocrisy.

Instead of leading the discussion, the Church as a whole has been relatively silent.  From what we’ve been told, the silence is deafening.

But I’m not racist! You may say… 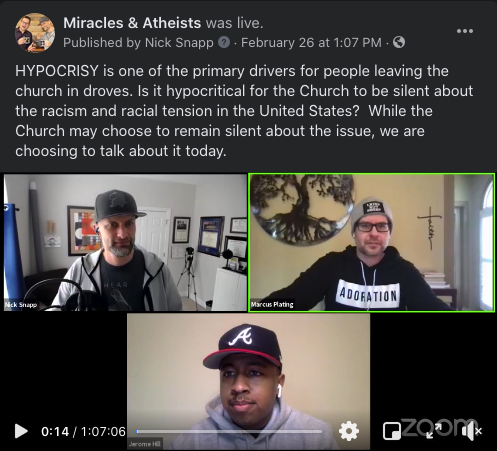 Today we’ll be challenging ourselves a bit, and talk about racism in the church. It’s a unique episode, because we originally recorded LIVE on Facebook, but thought it important enough to put it out on the podcast.

The Church as a whole has been relatively silent about racism, and from what we’ve been told, the silence is deafening.  Marcus was first told this by our guest, Keisha Villareal…

Keisha is on the leadership team at Marcus’ church New Bethel in Raleigh, NC. He had an uncomfortable conversation with her a couple months back, and that conversation propagated action.

Our second guest is Mr. Jerome Hill Jr.  You may recognize his name, because Jerome handles a great deal of our social media efforts for the Miracles and Atheists platform and he does an excellent job.  In addition, Jerome is the Digital Marketing Manager at iServe Residential Lending and he studied economics at Middle Tennessee University.  Jerome is a Christian DJ, also known as DJ Rome.

It was an important, powerful conversation that we hope sets a new standard that will inspire you to have your own uncomfortable conversations about racism.

TOUGH QUESTION OF THE WEEK

Why does it seem like God isn’t helping the people who need it most?